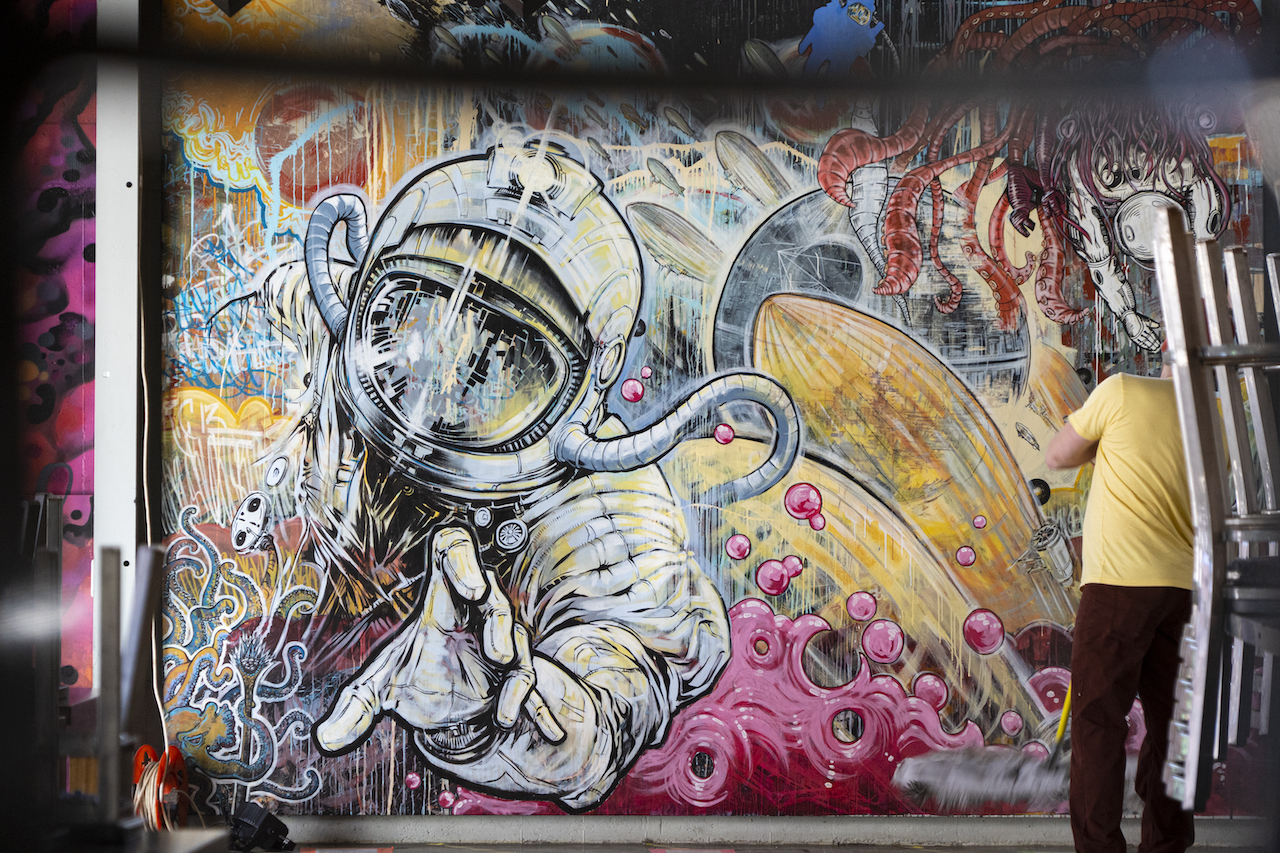 There’s an astronaut painted on the wall of Modist Brewing Co. in downtown Minneapolis, MN. It reaches a spacesuited glove towards the elevated brewdeck, a reminder to all patrons of Modist’s tech-forward stance when it comes to their craft.

“I feel like a lot of people are still stuck in their roots,” says Modist Head Brewer Jack Greer. “‘Oh, this is how it’s always been done, this is how we’re gonna do it.’ But Keigan [Knee, co-founder] and I were obsessed with process and how technology could help us achieve the flavors that we want.”

On a late fall day, Jack walked us through Modist’s philosophy and brewhouse, where technology and tradition achieve a delicate balance.  The brewery’s name evokes modernism and experimentation, “a modern artistic expression utilizing modification to achieve a self-conscious and intentional break from the conventional.” Modist is one of just a handful of breweries in the United States to use a mash filter instead of a traditional lauter tun for wort separation. Inspired by a passage in The Practical Brewer to source one for their 2016 opening, the mash filter has allowed Modist to utilize percentages of oats, wheat, and other grains that would not be possible with a conventional MLT setup.  “That alone sort of flipped the mindset of the brewery, thinking ‘oh, we can create new flavors using this thing!’” Jack recalled.

Mash filters are also a boon for efficiency and sustainability. Because there’s no need to preserve husk material for lautering Modist uses a hammer mill for their grist, which translates to higher extract yields from the malt used. “You’re using about 20% less ingredients overall – mostly water and grain – but you get the same volume of wort that you’d get from a traditional brewhouse,” said Jack.

Modist’s experimental spirit extends beyond brewhouse configurations and technology. Walking us past foeders that were just emptied of an oak-aged pilsner (brewed with Rahr North Star Pils™), Jack explains “We were just like ‘We’ve brewed beers like this forever, why don’t we try doing them the opposite, or sort of reverse-engineering them?’ We focus on the flavor first and work backwards from there, instead of working on the flavors and moving forwards to the final product.”

“A great example (of the Modist technique) is First Call, one of our flagship beers,” said Jack. First released in 2016, First Call is a GABF medal-winning pale lager with a mind-blowing coffee punch. “We wanted a beer that tastes like a latte, right? We want it to be creamy, we want it to have lactose, but we want it to be light. We don’t want it to take a stout of porter stance where they add coffee to already chocolatey beers. Why don’t we make something that you can slam?” Watching cans of that aforementioned oak-aged pilsner progress down the line, Jack reflected on Modist’s place in the lineage of American craft brewing. “I hope people look at us and they can see that we want one foot in the present and one foot in the past,” he said. “I want us to be known for innovation and keeping up with trends brewing what people want, but also most days we have three or four lagers up there, some Belgian-style ales.” Pointing at the tap list behind the bar where those beers coexist with hazy IPAs and fruited sours, Jack concludes: “We’re keeping a foot in the past, remembering where we came from, while still putting our twist on it.”

Make sure to visit the Modist Brewing taproom during your trip to Minneapolis for the 2022 Craft Brewers Conference!